Beta glucans are a group of polysaccharides naturally occurring in the cell walls of cereals, bacteria and fungi. As a soluble fiber, beta glucans vary in molecular mass, solubility, viscosity, branching structure and gelation properties—depending on where they are sourced from.

Cereal grains and fungal plants have been used for at least two millennia for medicinal and cosmetic purposes; however, the role of beta glucans, specifically, was not explored until the 20th century.

Beta glucans were first discovered in lichens, and shortly thereafter in barley. A particular interest in beta glucan from oats arose after the cholesterol-lowering effect from oats was reported in 1981. 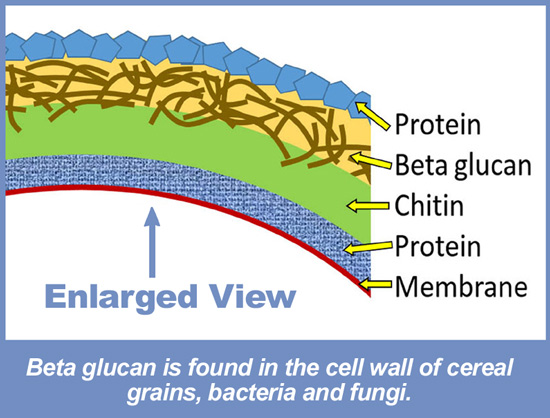 In 1997, the FDA approved of a claim that intake of at least three grams of beta glucan from oats per day decreased absorption of dietary cholesterol and reduced the risk of coronary heart disease. The approved health claim was later amended to include other sources, including oatmeal, oat bran, whole oat flour, oatrim, and whole grain barley.

Of course these health claims are just the tip of the iceberg. Beta glucans have many benefits besides heart health; however, official “FDA approval” is difficult to attain for generic foods since there is no financial backing from pharmaceutical companies to fund the research, lobbying and legal wrangling involved in gaining approval.

Support of immune function comes by way of strengthening the body’s ability to fight off infections. It does this by boosting the production of leukocytes. Leukocytes are the white blood cells that rush to defend the body from invaders like colds or the flu—and, now, it appears, also COVID-19.

In a new clinical trial conducted in India, patients who received two different beta glucans, in addition to the standard COVID-19 treatment, progressed better than the control groups who did not receive beta glucans.

In tracking progress, the doctor-researchers saw a greater reduction in C-reactive proteins—ferritin and Interleukin—which are important biomarkers to predict the course of COVID-19. Patients with significant reductions in the reactive proteins have lower risk of developing severe disease and respiratory failure.

The study was conducted at Madras Medical College Hospital in Chennai, India.

In total, 40 adult patients with mild to moderate COVID-19 were recruited. The test subjects required hospitalization; however, those requiring intensive care at the beginning of the trial period were excluded.

The test subjects were divided into two groups: The first group was the control group receiving standard treatment for COVID-19 including Dexamethasone, Azithromycin, Remdesivir, Vitamin C, Zinc and Enoxaparin sodium. The second group received standard treatment as well as two beta glucans supplied by GN Corporation, a beta glucan supplier based in Japan. The trial period was 15 days.

Researchers reported the cytokine storm and coagulopathy markers continued to be under significant control on day 15 in those who consumed the two beta glucan strains together​—a status that was not observed in the control group.

The primary outcomes were the time taken to improve, complete recovery, and recurrence in typical symptoms from baseline. The secondary outcomes were mortality, progression to critical care admission, and placement on oxygen/life-support.

The study was conducted in late 2021, and the findings were published on MedRxiv.org in January 2022. MedRxiv is a preprint server for research that has not yet been peer-reviewed.