94% of adults don’t get enough fiber, increasing their risk of chronic diseases 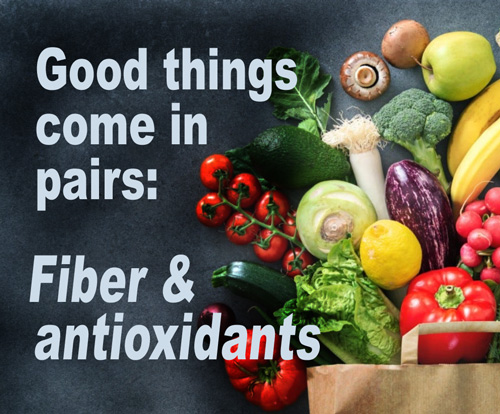 A whopping 94% of American don’t get enough fiber in their diet. This is the conclusion from averaging two major recent studies.

A study presented at the Nutrition 2021 Live online conference, sponsored by the American Society for Nutrition, reported that 93% of Americans were failing to consume the recommended daily allowance (RDA) of fiber.

Researchers conducting this study used data gathered from 14,600 subjects participating in the National Health and Nutrition Examination Survey during the years 2013 to 2018.

The results of the study were strikingly similar to a study published in American Journal of Lifestyle Medicine in January 2017 that reported a failure rate slightly worse—at 95%.

Researchers in the 2021 study found that women performed slightly better than men on average, but both were far short of the RDA: Women in the study consumed only 9.9 grams per 1,000 calories, while men consumed only 8.7 grams on average.

Achieving the fiber RDA requires consuming a good mix of fruits, vegetables and whole grains each day—a habit that is clearly lacking in the Standard American Diet.

Half the foods Americans eat are nutrient deficient

Surveys of Americans would agree: More than half of the calories Americans consume come from “heavily processed” foods, and on any given day nearly 40 percent of Americans eat fast food. These prepared and processed meals are not only low in fiber, some are completely fiber free!

Fiber’s health benefits are not derived from the nutrients it contains, but via its function. Fiber is a type of carbohydrate that passes through the body undigested, an action that conveys many benefits. Though perhaps best known for its role in supporting regular bowel movements, it’s the “regularity” that improves so many aspects of health.

For people who already have diabetes fiber is critical to help improve blood sugar levels.

According to a study published in Microbial Ecology, just two weeks of a high-fiber diet can have a significant effect on the gut microbiome.

And a healthy gut microbiome leads to better nutrient absorption from all consumed foods!

Contributing to the low intake of fiber is the popularity of low-carb diets. People are so busy avoiding carbs, they forget that carbohydrates provide important dietary components—like fiber.

Besides promoting regularity, it also attaches to toxins and helps the body eliminate them. Fiber is also essential for keeping the gut microbiome healthy. Without regular fiber the critical “healthy bacteria” become diminished.

In addition to fruits and vegetables, other sources of fiber include seeds, nuts and legumes.

It is also worth noting that there are two types of fiber: soluble and insoluble. They work in different ways, but both are considered beneficial for health.

Soluble fiber creates a gel as it dissolves, which helps to slow the absorption of sugar, improving blood glucose regulation. Insoluble fiber doesn’t dissolve in the same way, but does draw water into your stool so it’s easier to route through your digestive system. 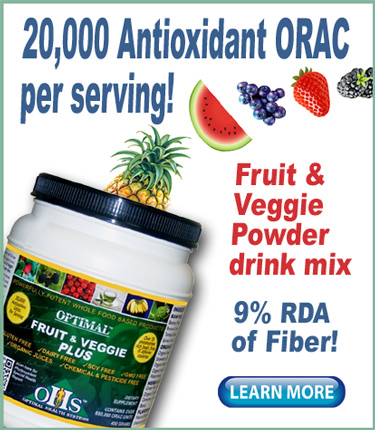 Perhaps the most critical health association is between fiber consumption and heart health. For example, research published in JAMA in 1996 found that participants with a high total dietary fiber intake had a 40% lower risk of coronary heart disease.

One way to boost fiber intake easily is by supplementing with Fruit & Veggie Plus from Optimal Health Systems.

Packed with dozens of fruits, veggies and herbs, each scoop of Fruit & Veggie Plus provides 3 grams of fiber—about 9% of the RDA.

Start lowering your risk of chronic diseases today with a scoop of Fruit & Veggie Plus. Click sidebar ad for more info.