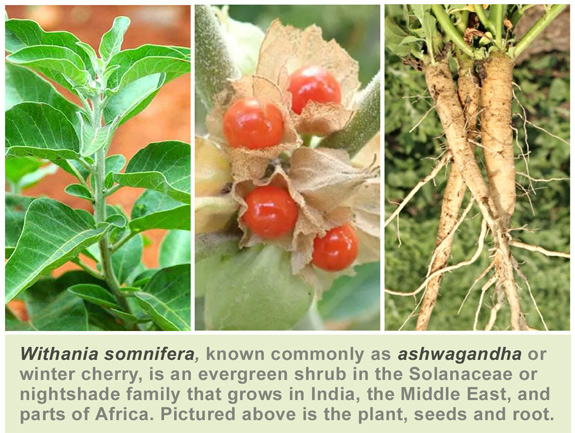 Ashwagandha might be the most versatile, potent and widely-used herb in the sphere of  natural healing and nutritional support.

Ashwagandha is an evergreen shrub in the Solanaceae or nightshade family that grows in India, the Middle East, and parts of Africa. Other regions of cultivation include Nepal, Sri Lanka, China and Yemen.

Also known as Indian ginseng, winter cherry and sleeping berry, the ashwagandha plant size can range from 13 to 30 inches in height when fully grown.

The name of the herb derives from Sanskrit, and means “smells like a horse”, which refers to the strong smell of the root which is said to be redolent of horse sweat or urine. The species name Somnifera means “sleep-inducing” in Latin.

In traditional Ayurvedic Medicine, the root and leaves may be powdered or dried, while the berries may be chewed or also dried.

In India, the powder extract is often mixed with water or milk for general health. In Western countries ashwagandha is most often found in capsules, but may also be acquired in bulk powder for those devotees who consume larger quantities. It is also used by compounding pharmacists as part of a formula.

The American Herbal Pharmacopoeia states that the primary uses of ashwagandha at compounding pharmacies include “adaptogenic, anti-inflammatory, antioxidant, cardioactive, and immunomodulatory activity and its ability to reduce cortisol levels under stress.”

Wikipedia, which is funded in large part by pharmaceutical companies, uses the standard boilerplate wording that is uses for all herbs: “There is insufficient scientific evidence that it is safe or effective for treating any disease.” However, this pharmaceutical-sponsored narrative is clearly in contradiction to the 1,400-plus studies found in the National Institute of Health’s PubMed database. Even a rudimentary review of this list shows some 90% of the studies demonstrated positive results in the treatment of dozens of different health conditions.

Just in the past five years several pivotal studies have highlighted the unique and versatile benefits of ashwagandha:

• A study published July 2021 in the Journal of Clinical Medicine ​demonstrated that supplementation with a low dose of  standardized ashwagandha extract “modulated the innate and adaptive immune systems” in healthy subjects and “significantly improved their immune profile.”

• A 2020 study published in Sleep Medicine found that six weeks of supplementation with ashwagandha extract improved overall sleep quality and boosted quality of life. The study was deemed to be the first to research ashwagandha relative to lessening the “non-restorative” stage of sleep.

• Another 2021 study found that ashwagandha root extract in time-release capsules lowered stress level markers and improved cognitive function. The study was a double-blind, randomized, placebo-controlled clinical trial with a test period of 90 days. Study details were published in Evidence-Based Complementary and Alternative Medicine.

• A 2018 study from India  found that eight weeks of supplementation with ashwagandha root extract helped normalize levels of serum thyroid hormones. Authors of the study noted that is corroborated numerous earlier studies with the same conclusions. Study details were published in the Journal of Alternative and Complementary Medicine.

Ashwagandha can be found in premium Optimal Health Systems products, including Optimal Cort-Adrena and the Stress/Anxiety Relief Pak. 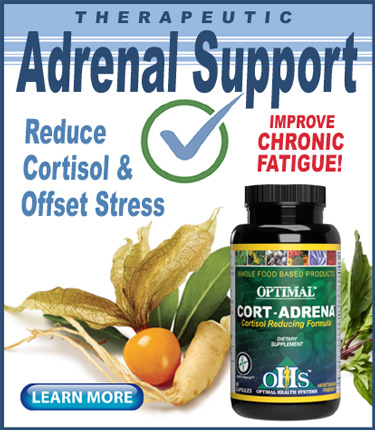