The California state legislature has approved new legislation that appears to be more about pleasing the pharmaceutical industry than following actual science.

The new bill, AB-1341, effectively bans the sale of dietary supplements either formulated or marketed for weight loss to anyone under the age of 18.

The bill is now advancing to the committee process in the California Senate.

The ban, which does not identify any specific ingredient, or provide any evidence of deaths caused by weight loss products, passed with a 44-12 margin. 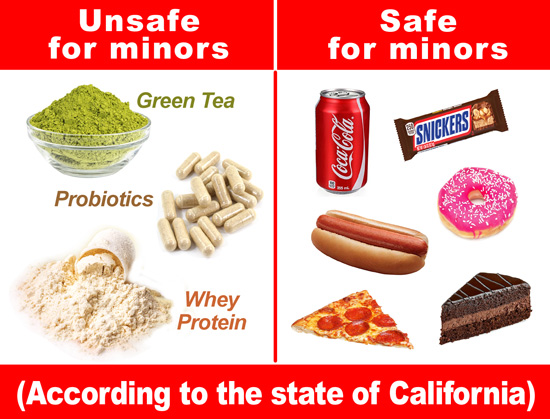 Since the legislation has been passed at a time when a much more obvious threat—fentanyl deaths—is causing real carnage among California youths, detractors of the new law are questioning the motives. Manufacturers and sellers of dietary supplements frequently point out that pharmaceutical companies are on a quest to eliminate competition by pushing for stricter regulations on supplements, and the new California legislation adds credibility to the claims.

The real threat to California youth

Considering these horrendous stats, a person could be forgiven for assuming that weight loss supplements are causing similar problems in California—but that thinking would be wrong.

In submitting the legislation, the bill’s sponsors claimed there was a link between dietary supplement usage and eating disorders; however, they provided only an opinion, no presentation of real data.

Following-up on the lack of evidence that dietary supplements were causing issues, the Natural Products Association (NPA) filed a Freedom of Information Act request with the U.S. Food and Drug Administration (FDA). The result? According to the FDA, no adverse events or reporting associated with dietary supplements and eating disorders could be provided.

“Under this bill, the fine for selling nutritional supplements would be four to five times higher than the fines for selling alcohol or tobacco to a minor. Dietary supplements are not drugs, nor should they be treated as such. If AB 1341 passes it would criminalize the sale of healthy products like whey protein and amino acids,” noted Kyle Turk, director of government affairs for NPA, when providing testimony against the legislation in 2021.

Though it seems unbelievable, at the same time California legislated stiff penalties for anyone committing the “crime” of selling weight loss supplements to minors, the legislature literally provides grants to help cities in California provide narcotics to drug addicts for free.

The situation seems so absurd it leaves reasonable people asking how it happens. Do pharmaceutical companies, in fact, play a part in California laws such as this (and in the other states proposing similar legislation)?

Drug companies split their money generously between both political parties

Consider: In the 2020 election cycle, Chad Mayes, formerly the California State Assembly’s top Republican and now a political independent, accepted $79,600 from drug companies—the most of any lawmaker in the country. Not to be outdone, three state Democrats in the California Assembly were close behind, having cashed between $65,000 and $75,000 each in drug company funds. (Source: StatNews.com.)

And it doesn’t end with these four large-amount recipients. Researchers assessed that the California assembly was the largest recipient of drug company money amongst the 50 states. (Source: JAMA Internal Medicine study, May 2020.)

Researchers also found the majority of California state lawmakers accepted donations from multiple drug companies during the previous election cycle. Some legislators received contributions from as many as 20 different pharmaceutical companies.

To understand just how embedded the pharmaceutical companies are in regards to California lawmaking, looking closer at individual lawmakers is helpful. Here is one example: 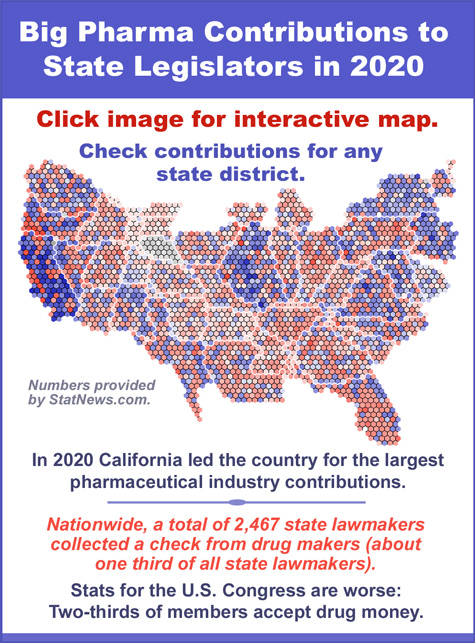 Using numbers provided by StatNews.com, we can break-down the contributions made to Jim Cooper, a Democratic assemblyman representing California’s District 9, just east of San Francisco:

This is a snapshot of a single state lawmaker. There are almost 7,500 state legislators or assemblymen across the 50 U.S. states, and the vast majority of them receive contributions from drug companies at some point of their tenure in office. Though not all lawmakers receive as much as the example cited above, the total amount of money spent to gain influence in the country’s state legislatures is eye-popping.

It doesn’t stop at the state level

Approximately $100 million more is spent on lobbying at the federal level. This money is distributed between the two-thirds of U.S. house and senate members who accept money from pharmaceutical companies.

According to a report conducted by the Center for Responsive Politics, this lobbying is carried-out by a task force of over 1,100 lobbyists. These numbers were tallied in 2017—before lobbying by drug companies increased during the COVID-19 pandemic.

Even Wikipedia, an organization that also benefits from generous pharmaceutical industry donations, admits there is a significant problem with drug money influence:

“There has been increasing controversy surrounding pharmaceutical marketing and influence. There have been accusations and findings of influence on doctors and other health professionals through drug reps including the constant provision of marketing ‘gifts’ and biased information to health professionals; highly prevalent advertising in journals and conferences; funding independent healthcare organizations and health promotion campaigns; lobbying physicians and politicians (more than any other industry in the US); sponsorship of medical schools or nurse training; sponsorship of continuing educational events, with influence on the curriculum; and hiring physicians as paid consultants on medical advisory boards.”

Is it any wonder that the end result of all this drug company influence is absurd legislation that limits access to healthy supplements while supporting drug company growth?

In related regulation news, the American College of Clinical Pharmacology has once again called for more regulatory oversight of dietary supplements. The position paper was released at the end of 2021, and has been widely cited in the news media in the subsequent months.

Ironically, the three-page paper acknowledges that billions of supplements are taken daily by tens of millions of Americans, but cites no death statistics. This in itself is an acknowledgement that deaths attributed to nutritional supplements are extremely rare—zero for most years.

At the same time the pharmacy-funded college was calling for increased regulation of the extremely-safe supplement industry, the CDC announced that drug overdose deaths in the U.S. for the previous year exceeded 93,000.