Celebrating 25 years: The watershed research that proved enzymes and antioxidants are superior to NSAIDs 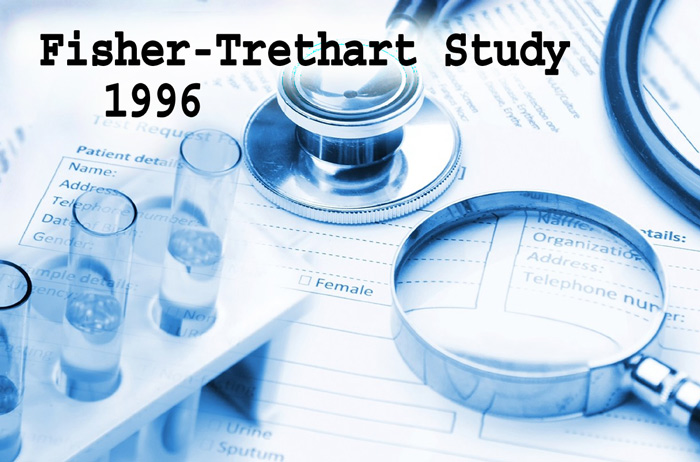 Today the anti-inflammatory benefits of proteolytic enzymes and antioxidants are widely known. The CDC website touts the antioxidant benefits of fruits and vegetables, and many physicians today might try a regimen of enzymes before prescribing prescriptions to a patient.

Research related to the two nutrients has skyrocketed. According to Wikipedia, there are over 8,000 studies published each year on just the enzyme protease.

But this was not always the case. Achieving wide acceptance by the medical community has been an uphill battle, and even today many consumers still don’t know what the health benefits of enzymes and antioxidants are.

Identification of enzymes and antioxidants happened well over 100 years ago; however, the focus was not related to human health—it was industrial uses.

In the second half of the 20th century much headway was made in understanding how the nutrients related to human health. These studies focused on digestive and anti-inflammatory benefits. Then, in 1996, the groundbreaking research of Dr Brian Fisher and Dr Tris Trethart was published.

Reaching this milestone—now celebrating its 25th anniversary—cannot be understated. With this study came the proof that natural ingredients can achieve healing and pain relief better than nonsteroidal anti-inflammatory drugs (NSAIDs).

Moreover the research was pivotal in the development of Optimal Health Systems‘ top-selling product Optimal Acute.

The 1996 Fisher and Trethart study found that the combination of proteolytic  enzymes and antioxidants, when given within the first 24 hours following acute injury, had a down-regulating effect on the acute inflammatory response.

In addition, the antioxidants stabilize the blood vessel walls, which in turn decrease the amount of edema present at the injury site.

The antioxidants act by scavenging oxidants and free radicals, and possess a unique ability to preserve collagen molecules. Collagen molecules are a major component of the soft tissue structures and are compromised at the time of injury.

Much of this early research on enzymes and antioxidants was conducted on professional athletes. 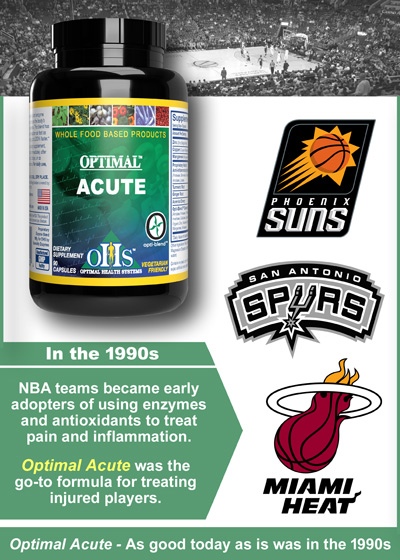 This was a logical group to study since athletes are prone to injury, and since there is a financial interest in keeping the athletes in top condition.

Pilot studies had revealed that injured football players returned to play with more vigor when they were treated with proteolytic enzymes and antioxidants, as opposed to NSAIDs and ice.

Dr Trethart found that this combination was extremely useful in the early stages after a sports injury or for persons recovering from surgical procedures.  He also found that this combination benefited conditions such as atherosclerosis, back strain, disc pain, sciatica, and whiplash.  With these conditions, the management of the inflammatory process with proteolytic enzymes and antioxidants may was understood to be the reason for the positive response.

Due to the definitive conclusions of this early research, Optimal Health Systems developed the first enzyme/antioxidant product in the late 1990s—Optimal Acute. Today Optimal Acute remains the industry standard for inflammation and pain control. 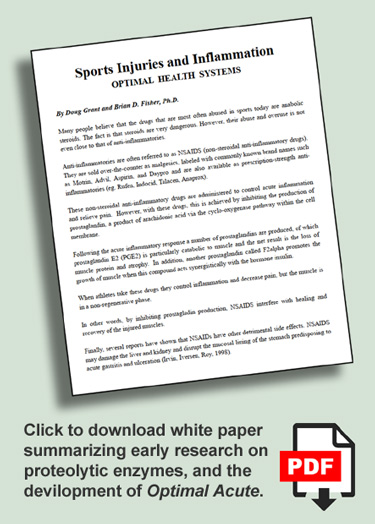 In the late 1990s a number of NBA players were already using Optimal Acute—long before most consumers had even heard of proteolytic enzymes and antioxidants.

Unlike proteolytic enzymes, which inhibit only the “bad” prostaglandins, aspirin and other non-steroidal anti-inflammatory drugs (NSAIDs) inhibit all prostaglandins.

Because these drugs have such a broad effect, even the “good” anti-inflammatory prostaglandins are inhibited.

They do this by inhibiting the enzyme, cyclo-oxygenase—the first step in the inflammatory reaction.

Cortisone is also used to fight inflammation, especially in chronic inflammatory conditions such as arthritis. Cortisone works because it stabilizes the cell membrane and prevents the production of the whole family of prostaglandins. During the inflammatory process, however, production of PGE2 can increase fifty to five hundred-fold.

By inhibiting the release of prostaglandins, cortisone completely suppresses all protein synthesis, placing the wound in a neutral state or a non-healing response.  This weakens soft tissue structures and predisposes the tissue to further injury.

In humans, a condition known as Cushing’s syndrome is caused by excessive amounts of corticosteroids.  This results in muscle weakness, atrophy, and death of the muscle fiber.

Cortisone and other corticosteroids suppress the symptoms associated with acute inflammation, but compromise the recovery process.

The idea that proteolytic enzymes and antioxidants could provide more effective pain relief than NSAIDs was welcome news 25 years ago. And it still is—at least for those who are aware of the carnage caused by NSAIDs, and are seeking a natural alternative.

Though the exact number of deaths caused by NSAIDs is hard to pinpoint, and is debated among experts, a study by The New England Journal of Medicine set the number at 16,500 yearly.

In addition, over 103,000 people are hospitalized each year, due to gastrointestinal issues caused by overuse of NSAIDs.

These numbers clearly show there is still a lot of work to do in promoting natural alternatives for pain relief.

The option of choosing enzymes and antioxidants over NSAIDs was proven effective 25 years ago, yet 30 million people still reach for NSAIDs on a daily basis. And deaths continue to pile up.

Click the sidebar ad to learn more about Optimal Acute—the industry standard for natural relief for pain and inflammation for over two decades. 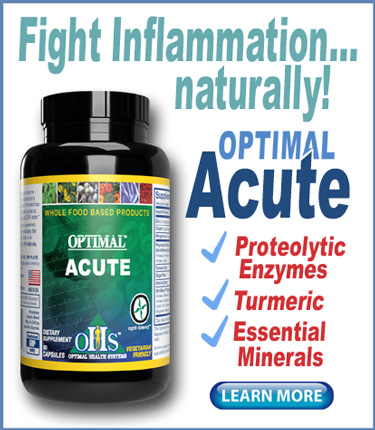