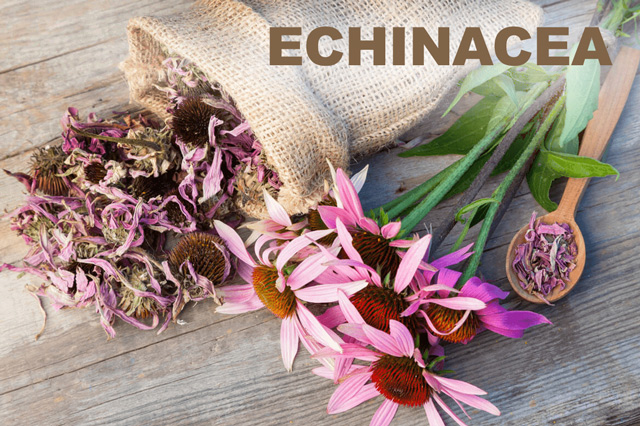 The herb that natural health advocates know as “Echinacea” is actually a genus—or a family of different species.

The Echinacea genus includes ten species. They are herbaceous flowering plants which are themselves part of the bigger daisy family.

Three of the ten species in the Echinacea family are commonly used in herbal medicine and nutritional supplements:

Native Echinacea plants are found only in eastern and central North America, where they grow in moist to dry prairies and open wooded areas. They have large, showy heads of composite flowers, blooming from early to late summer.

Echinacea is one of the most popularl ingredients in herbal medicine due to its impressive health-promoting properties.

Among these “health-promoting properties” are potent immune support benefits.

Echinacea contains several chemicals that play a role in its therapeutic effects. These include polysaccharides, glycoproteins, alkamides, volatile oils, and flavonoids.

Many Echinacea preparations contain one, two, or even all three of the medicinal species. This partially explains why the effectiveness of Echinacea may differ from one product to another.

Many parts of the plant, including its flowers, leaves, and roots, are used for natural remedies; however, research suggests that the above-ground portion of Echinacea purpurea is the most effective.

Echinacea purpurea is also the variety that was used in traditional herbal remedies by the Great Plains Indian tribes in the United States.

As a testament to Echinacea’s medicinal properties it was officially listed in the U.S. National Formulary. In fact it was listed for over three decades—from 1916 to 1950—and was commonly available at pharmacies throughout the U.S.

With the discovery of antibiotics, Echinacea fell out of favor as the go-to choice for an anti-viral or anti-bacterial medicine. So, along with dozens of other herbs, Echinacea was de-listed in favor of the 20th century’s wonder drugs. 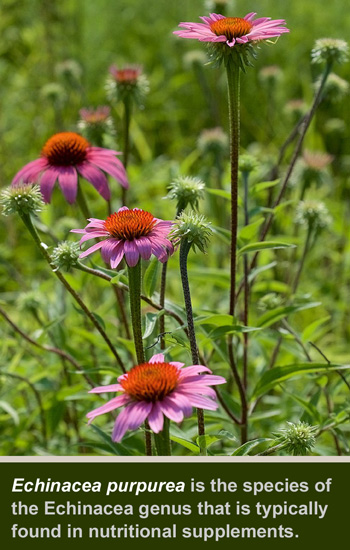 The surprising twist is that now—seven decades later—people are becoming interested in Echinacea again.

This is happening because some antibiotics don’t work as well as they used to against certain bacteria. The antibiotics aren’t as effective today because over-prescribing has given rise to “superbugs” that are largely immune to modern antibiotic medicines.

With it’s growing popularity Echinacea is now widely used to fight infections—especially the common cold, flu, and other respiratory infections.

According to RxList.com Echinacea is also used against a long list of other infections, including:

In our next post we’ll cover five studies demonstrating the potent immune building properties of Echinacea. Be sure to check back soon.