Consuming a flavonoid-rich diet protects against cancer and heart disease, particularly for smokers and heavy drinkers, according to new research from Edith Cowan University (ECU) in Australia.

Flavonoids are a type of antioxidant found in fruits, vegetables, herbs and tea. They can also be found in other plant sources such as legumes and grains, though typically in lessor amounts.

Researchers from ECU’s School of Medical and Health Sciences analysed data from the Danish Diet, Cancer and Health cohort study. Analyzing this data allowed the researchers to assess the diets of 53,048 Danes over a 23-year period.

They found that people who “habitually consumed” moderate to high amounts of foods rich in flavonoids were less likely to die from cancer or heart disease. 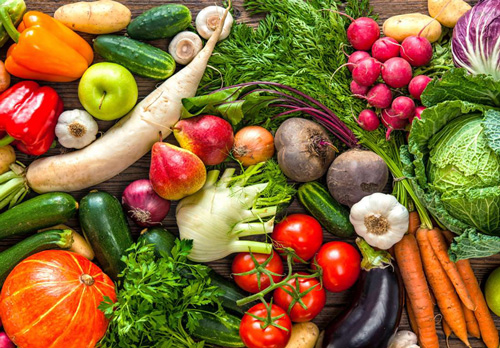 The bigger the variety of colors, the better

When it comes to flavonoid foods, the general rule is that the more colorful a food item is, the richer it will be. Oranges are an exception to the rule because the flavonoids contained in this fruit are mainly found in the white and pulp interior of the skin.

The best way to ensure a good intake of flavonoids is to consume plenty of fresh fruit and vegetables on a daily basis.

For years experts have advised eating five servings of vegetables and four servings of fruit daily; however, many experts feel this guideline is low.

More benefit for those with high risk

Lead researcher Dr Nicola Bondonno stated that while the study found a lower risk of death for anyone who ate flavonoid-rich foods, the strongest protective effect appeared to be provided to those at high risk of chronic diseases linked to cigarette smoking and high alcohol consumption.

“These findings are important as they highlight the potential to prevent cancer and heart disease by encouraging the consumption of flavonoid-rich foods, particularly in people at high risk of these chronic diseases,” she said.

“But it’s also important to note that flavonoid consumption does not counteract all of the increased risk of death caused by smoking and high alcohol consumption. By far the best thing to do for your health is to quit smoking and cut down on alcohol.

“We know these kind of lifestyle changes can be very challenging, so encouraging flavonoid consumption might be a novel way to alleviate the increased risk, while also encouraging people to quit smoking and reduce their alcohol intake.”

A 2017 study published in the International Journal of Epidemiology estimated 7.8 million people worldwide die prematurely each year due to low fruit and vegetable consumption. “Low” was defined as eating less than 800 grams total per day.

The good news is that more than 6,000 compounds found in plant-based foods have been identified as flavonoids–so risks can be lowered by simply eating an assortment of appropriate plant foods daily.

The key is reducing inflammation

Though the study did not pinpoint the exact mechanism by which flavonoids provide their protective benefit, researchers suspect their anti-inflammatory properties provide the catalyst.

“Flavonoids have been shown to be anti-inflammatory and improve blood vessel function, which may explain why they are associated with a lower risk of death from heart disease and cancer,” said Bondonno.

Though increasing one’s intake of fruits and vegetables may seem like a daunting challenge to many, quality antioxidant supplements can help.

Caution should be exercised, however, to ensure the use of products derived from real foods, not synthetic “equivalents.”

Optimal Fruit & Veggie Plus from Optimal Health Systems makes it easy. This highly potent antioxidant powder is made with 24 raw freeze dried fruits and vegetables.

These flavonoid-rich raw foods are combined with organic juices, herbs and natural flavorings to provide a delicious drink powder.

One serving of Optimal Fruit & Veggie Plus provides more than 13 times the antioxidant potency that the average American conumes each day.