A new study, published in the The Journal of Nutrition, found that people who consumed a nitrate-rich diet had significantly better muscle function of their lower limbs.

The study’s findings are especially important to middle-aged and elderly populations. For these age groups poor muscle function is linked to greater risk of falls and fractures, and is considered a key indicator of general health. The research was conducted at Edith Cowan University in Perth, Western Australia, and was published in March 2021.

Though nitrates have numerous benefits, it is nitrate’s unique ability at improving nitric oxide bioavailability in the body that is thought to be the reason for the improved muscle function.

Nitric oxide is a potent molecule in cell signaling which can enhance blood vessel health, blood pressure and cardiovascular function—and having a regular intake of nitrate is known to enhance nitric oxide.

Consistent with this, the improved muscle function found in the study would be due to increased blood flow to skeletal muscle via the nitrate/nitric oxide link.

This nitrate effect is so significant that nitrate was classified in 2018 by the International Olympic Committee as a performance-enhancing substance (ergogenic aid) for athletes.

To conduct the study researchers examined data from 3,759 Australians taking part in Melbourne’s Baker Heart and Diabetes Institute AusDiab study. The study period covered 12 years, which is significant in light of the fact that most nitrate studies are short-term.

The researchers found those with the highest regular nitrate consumption had 11 percent stronger lower limb strength than those with the lowest nitrate intake. Researchers also recorded walking speeds that were up to 4% faster.

Researchers reported that nitrate intake was calculated from a validated nitrate database and other published literature. Meanwhile, muscle function was quantified by industry accepted testing: The knee extension strength (KES) test and the 8-ft-timed-up-and-go (8ft-TUG) test.

“This work highlights the potential benefits of higher habitual dietary nitrate, predominantly from vegetables, to support muscle function in adults across the lifespan, independently of physical activity levels,” the researchers wrote in their summary.

“The aforementioned relation reached a plateau at nitrate intakes of about 90 mg/d, suggesting that moderate intakes of nitrate may be sufficient to maximize benefits for muscle strength and physical function.” 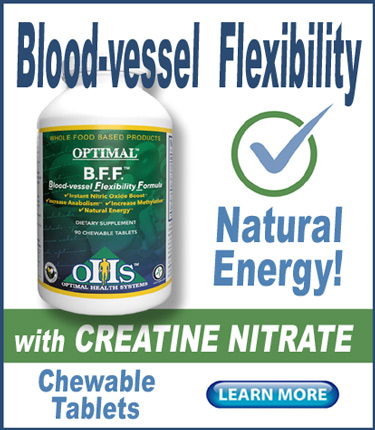 Boost energy and maintain muscle function as you age

Research shows that nitric oxide levels start dropping when a person is in their thirties, so it is critical to maintain an adequate intake of nitric oxide-boosting nitrates as you age.