Phytonutrient… Polyphenol… Flavonoid. What are the differences? A quick primer.

Numerous epidemiological and clinical studies indicate that a diet rich in fruit, vegetables and herbs improve health in a number of ways. Phytonutrients in the foods are the primary catalyst for these health benefits.

Many of these studies are documented here on the Optimal Health Insider blog; however, the terminology used can sometimes cause confusion since there are many types of phytonutrients.

In this post we’ll provide an introductory primer to define what a phytonutrient is, then clarify the different categories (or branches) of phytonutrients. 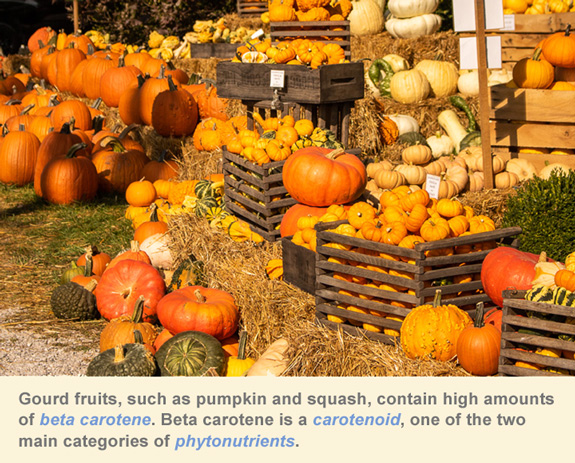 “Phytonutrient” is the broadest terminology when referring to the different nutrients derived from plants. Put simply, phytonutrients are nutrients of plant origin (from the Greek phyto–meaning “plant”).

The nutrients are produced by the plants through primary or secondary metabolism. The nutrients have biological activity in the plant host and play a role in plant growth. They also provide defense against disease, pathogens and predators. Many of these same biological benefits can be passed on to the animals (including humans) that ingest them.

Note that the word “phytonutrients” is often used interchangeably with “phytochemicals.” A phytonutrient search on Wikipedia, for example, will simply take you to the phytochemical page. This is unfortunate since any reasonable person can recognize that toxic plant-derived chemicals used in manufacturing processes are completely separate from the healthy nutrients that are also provided by plants.

For obvious reasons, in the health and nutrition industries the word phytonutrients represents exactly what the dictionary word means: plant-nutrients. 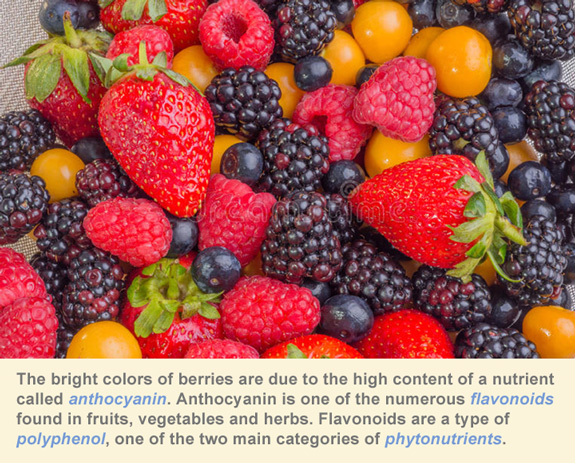 Carotenoids are yellow, orange, and red organic pigments that are produced by plants that are characteristically colorful. This includes pumpkins, carrots, parsnips, corn, tomatoes, etc.

Carotenoids serve two key roles in plants. First, they absorb light energy for use in photosynthesis, and, secondly, they provide photoprotection.

These are some of the same health benefits that carotenoids provide to humans (i.e. eye health).

Polyphenols is the second major category of phytonutrients. Polyphenols as a category that is not as well defined as carotenoids, but it is generally agreed that it is the large family of naturally occurring organic compounds characterized by multiples of “phenol” units.
.

Carotenoids are a huge category that is seperated into two classes: xanthophylls and carotenes (from the Latin carota, “carrot”). Xanthophylls contain oxygen while carotenes are purely hydrocarbons and contain no oxygen. Carotenes are further divided into two primary forms: alpha-carotene and beta-carotene.

The type of phytonutrient everyone has heard of—flavonoids

Of the four classes of polyphenols listed above, flavonoids is the one most routinely reviewed in studies and cited for health benefits. A quick Google search will identify it as the most headline-grabbing phytonutrient. 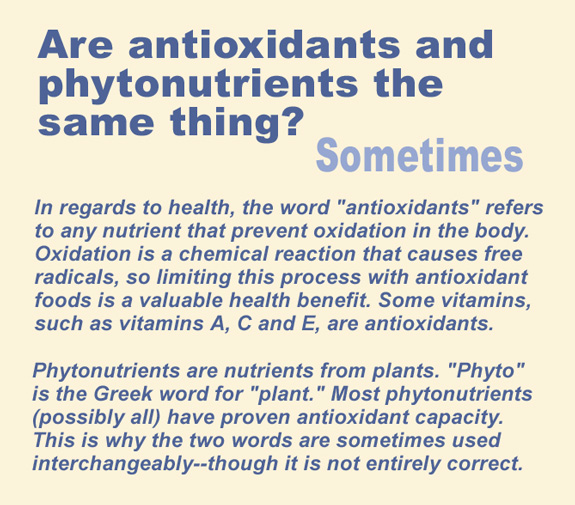 Flavonoids are further divided into different types, and many of them are quickly recognizable: flavones, flavonols, flavanols, flavanones, isoflavones and catechins.

Other flavonoids can be found in plants that many people recognize as “phytonutrient plants,” but have not heard the name of the flavonoid. Much of the distributed information simply uses the all-encompassing “phytonutrient” wording since a listing of all the sub-categories and types would have to be quite detailed.

These other flavonoids include: hesperetin (from citrus fruits), cyanidin (from red fruits and berries), daidzein (from soybeans) proanthocyanidins (from apples, grapes and cocoa), quercetin (from onion, tea and apples) and anthocyanin (from berries).

If keeping track of categories and classes of phytonutrients is important to you, it is best accomplished by starting with the food and working your way out to the larger grouping. A couple of examples:

• Pumpkin contains carotene, a nutrient commonly found in orange and red vegetables. Carotene is a carotenoid. Carotenoids are one of the two major classes of phytonutrients.

• Grapefruit contains hesperetin, a nutrient commonly found in citrus foods. Hesperetin is a flavonoid. Flavonoids are a class of polyphenol. Polyphenols are one of the two major classes of phytonutrients.

For the rest of us, who don’t want to remember the lineage of every plant we eat, the important take-away is to simply recognize the health benefit of variety.

There are literally thousands of phytonutrients—over 1,100 carotenoids alone—so consuming a wide variety of colors and textures of plants is the best way to ensure you receive the unique benefits offered by each grouping.

If this seems like a daunting task, consider supplementing with Optimal Fruit & Veggie Plus from Optimal Health Systems. It contains dozens of different fruits, vegetables and herbs in every scoop, so you are guaranteed a wide range of phytonutrients with every serving you mix up!