The antioxidant values of various foods are expressed in ORAC “units.”

ORAC is an acronym for “Oxygen Radical Absorbance Capacity.”

ORAC is a the unit of measurement that was developed specifically to have some type of uniform way to measure the differing amounts of antioxidants in the earth’s thousands of foods. 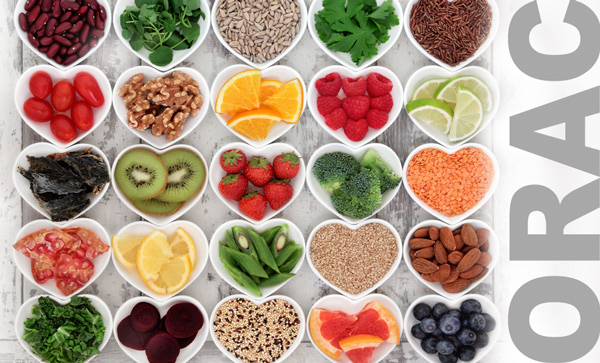 While the exact relationship between the ORAC value of a food and its health benefit is not officially recognized by the government, numerous studies appear to show that foods higher on the ORAC scale will more effectively neutralize free radicals.

Free radicals are unstable atoms that can cause damage to cells and lead to illnesses and the aging process. There are five known types of free radicals.

Scientists from various institutions around the world have repeatedly shown that the neutralization of free radicals slows the oxidative processes and the free radical damage that contributes to age-related degeneration and disease.

Generally speaking, every fruit, vegetable and legume has some amount of antioxidants—and, hence, an ORAC value.

However, the extremely high ORAC counts are found in herbs, brans and algaes—and these are the ingredients most commonly used in  high-ORAC natural supplements.

They can also be added to fruit and veggie-based antioxidant drinks to boost the ORAC count, while leaving the great taste of fruit and veggies unaffected. A good example is Fruit & Veggie Plus, available at Optimal Health Systems.

To review an extensive list of 500 foods sorted by ORAC value, visit the list at Superfoodly.com here.

To learn more about the five kinds of free radicals, visit the Fruit & Veggie Plus info page here.