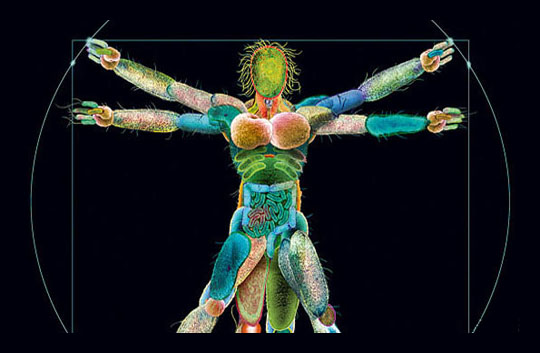 According to a consortium of scientists studying the human microbiome, people are more bacteria than human.

The massive Human Microbiome Project, launched in 2007 by the National Institutes of Health, is an effort to sequence the genes of all the microbes living in and on the human body.

The human genome is made up of about 23,000 genes. However, the number of non-human genes each of us carries around from bacteria, viruses and other pathogens living in and on us—totals 8 million!

That is why the scientists conclude that people are more bacteria than human.

By 2014 the scientists had published 16 papers on their findings in the journals Nature and PLOS One.

“This is a great, vast, unknown territory we have never studied before,” said George Weinstock, associate director of the Genome Institute at Washington University in St. Louis.

“There are so many organisms in so many different places in our body that they have to have a huge impact on our health,” Weinstock said, “but, we’ve only scratched the surface of understanding the extent to which these microbes can impact our health and who we are.”

The new genetic research includes full genetic sequences of certain species of microbes that reside in various parts of the body, including the nose, mouth, intestines and vagina, as well as descriptions of bacteria that have never before been seen.

Researchers found that the makeup of the bacterial communities differed from one person to another, with various weaknesses and strengths in each individual body.

Each individual is truly unique, and scientists found that good bacteria and bad bacteria could coexist in a complex equilibrium with 23,000 genes—but also with one another in the natural human body.

“The two systems—the human genome and the microbial genome—evolved together, said Lita Proctor, coordinator of the Human Microbiome Project. “This is not just exploratory science, but it’s meant to understand this dark matter of microbes in our bodies that we didn’t know anything about.

“We need to know what their role is, and what they are doing for us, and how we can support that role if it helps our health.”

Scientists detailed how the typical Western diet, containing high amounts of dairy and processed and sweet foods, can change the mix of bacteria, setting the stage for colitis and irritable bowel syndrome.

In gut environments with a large amount of milk-based fats, it turns out, certain bacterial strains that can cause inflammation tend to proliferate.

The real power of microbes lies in their ability to mix and match, concluded Proctor. “The vast majority are good bugs, and we want to support and feed our microbiome well.”

Well… if people are more bacteria than human, their microbes of mix and match have worked on their own for thousands of human generations.

Since the scientists concluded that modern processed food interferes with ‘good bugs,’ why not work for a better agricultural system of clean food instead of more chemical solutions to treat the problems of inadequate food and nutrition that created the modern problems in the first place?

The biggest problems in bacteria balance today are antibiotics and nutrition-killing processed foods.

Nature has a reason that people are more bacteria than human. It knows more than mere humans—who are struggling to find out how it works.

Probiotics from high quality sources have never been more important. You can learn more about them by clicking one of the links below.