The current war on natural medicine is also an ancient war

The ancient war on natural medicine is in full flower today.

Many of us understand that it is natural for Big Pharma and its allies in government to oppose natural healing methods that cut into massive profits and power over lives and health.

But few realize this war began long ago, at least as far back as the middle ages.

And this ancient war on natural medicine was primarily waged against women.

Those were the days of witch hunting, torture and an established church lurking around every corner to punish those who strayed from the established order. 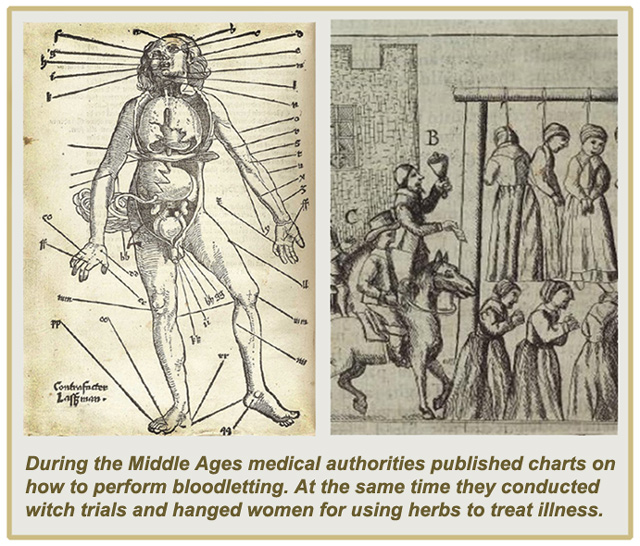 Women were usually the ones who gathered herbs, roots and other natural substances to make their potions. Many of these ‘witches’ were midwives utilizing various herbs to make pregnancy and birth easier.

It is estimated by Dr. Marija Gimbutas, professor of archeology at the University of California that as many as 9 million people, overwhelmingly women, were hanged or burned at the stake over the many years of the ‘witch craze.’

How ironic and tragic that women who collected herbs were burned at the stake while the established church at the time published writings advising which saints’ days were “favorable for bloodletting.”

Perhaps one day the current villification of anyone who prefers herbs over pharmaceuticals—when effective and practical—will also be recognized as a tragic injustice.

The nineteenth century saw an explosion of discovery and research as herbs from around the world gained recognition for treatment of ailments. Even as late as the 1930s herbal charts decorated the walls of local pharmacies.

But the pendulum has swung again to the opposite extreme as medical authorities in western countries have censored natural remedies in favor of pharmaceutical companies.

Today, men and women who work with nature through chiropractic, herbalism, acupuncture, vitamins, minerals, detoxing, fasting etc., are often hounded, ridiculed and even demonized as quacks—by the very medical practitioners who solemnly swore to abide by the Hippocratic Oath!

They are condemned for the ‘sin’ of trying to avoid if possible the modern monopolistic chemical orthodoxy of “operate and medicate.”

The message to the ‘Great Unwashed’ is do as we say, or else, and if they see it and hear it often enough they come to accept it as gospel. People who are regularly underinformed, duped, mesmerized and superficially placated are victims of a condition known as the ‘Stockholm Syndrome.’

Complacent in the assurance that Big Government and Big Pharma are paid well to know what’s best, they don’t bother to learn and question.

This is not unlike the witch craze days when the people paid church indulgences to keep themselves and their loved ones ‘safe.’

There was, and is, a reluctance to believe that the body can actually heal itself in many instances—without chemical interventions and indulgences.

Almost anyone can learn enough to question and consider whether the heavily chemical and unnatural medical practices of today are ALWAYS superior to nature’s medicines.

And ask yourself who benefits from the modern and ancient war on natural medicine.