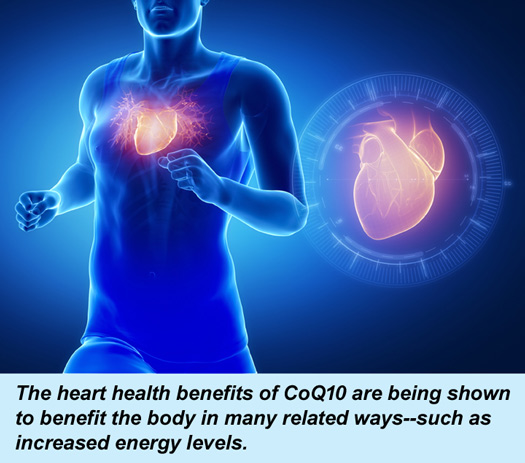 CoQ10—an abbreviation for Coenzyme Q10—is a lipid-soluble antioxidant produced by the human body, but known to diminish as people age.

The authors of the new study explain that CoQ10 reduces oxidation in cellular membranes. It also protects the peripheral and central nervous systems, and regulates mitochondrial respiration.

Because of these benefits CoQ10 is thought of as an anti-aging nutrient, and has grown in popularity as a nutritional supplement.

To many of these consumers, increased energy is one of the goals—a related benefit gained from improved heart and cellular function.

The research project was a collaboration of scientists from universities in Taiwan and South Korea. Team members conducted a meta-analysis that included 1,126 subjects with a mean age of 49 years.

The primary aim was to evaluate fatigue scores following CoQ10 supplementation, but there was also and a secondary investigation to determine the level of adverse effects.

Dosages taken by the different study groups ranged from 60 to 500mg daily.

Study results indicated that a reduction in fatigue was demonstrated in every trial examined by researchers. The positive results were consistent among both healthy subject groups and groups with fatigue-associated diseases.

“CoQ10 was shown to statistically significantly reduce fatigue, and was maintained within sensitivity analyses,” the authors wrote in the study summary. “Moreover, an increase in the daily dose and treatment duration of CoQ10 correlated with a better reduction in fatigue.”

The research was published in Frontiers in Pharmacology in August 2022.

Earlier studies have also provided evidence supporting the role of CoQ10 in alleviating fatigue symptoms. This includes a trial comparing patients with depression and chronic fatigue syndrome that found CoQ10 deficiency was positively associated with fatigue.

CoQ10 has also been studied for neurological benefits, infertility support and muscle building.

A 2020 study demonstrated that even healthy young people benefit from CoQ10 supplementing. The study, conducted in Spain, found CoQ10 effective in reducing the severity of muscle damage observed in professional soccer players.

According to researchers CoQ10 is “a well-studied substance with a well-documented safety level of 1,200 mg/day per person.”

The current study builds on this existing safety record with only one adverse event of the 1,126 study subjects treated with CoQ10. The adverse event was gastrointestinal problems serious enough to withdraw from the study.

CoQ10 can be found in the more absorbable—and effective—form, ubiquinol, in the following Optimal Health Systems products: