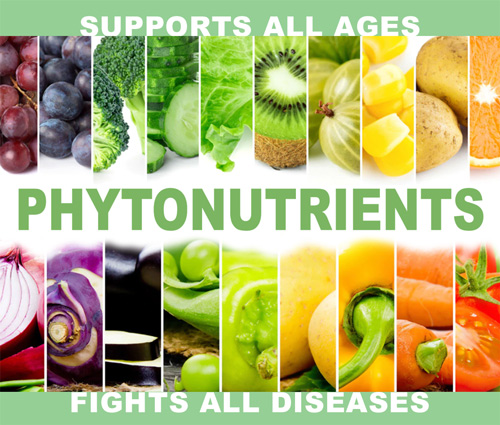 The health benefits of consuming regular amounts of phytonutrients are diverse and extensive.

So diverse, in fact, that two new studies highlighted the benefits on opposite ends of the age spectrum—elderly women and young kids.

A new study from the University of Georgia (UGA) concluded that higher rates of illnesses in elderly women could be improved by a diet high in phytonutrients.

Meanwhile, a new analysis of children with attention deficit hyperactivity disorder (ADHD) conducted at the University of Ohio found that the children eating less phytonutrient-rich fruits and vegetables were likely to have more severe inattention and behavioral issues.

Phytonutrients are plant nutrients. Humans absorb the nutrients when the plants are consumed for food, though processing and cooking can reduce the nutrient content.

Phytonutrients start life as phytochemicals—chemicals that the plants use to help them resist fungi, bacteria and plant viruses. It is these same chemical attributes that provide protection against disease for humans.

The study on women focused on carotenoids—the phytonutrients that come from yellow, orange and red organic pigments that are produced by plants that are characteristically colorful. These plants include pumpkins, carrots, parsnips, corn, yams, watermelon and tomatoes.

Carotenoids are most often associated with eye health—especially lutein and zeaxanthin—however carotenoid phytonutrients are actually linked to many other types of neruological health, and are proven to reduce the rate of almost all diseases when consumed regularly.

Study on women and carotenoid phytonutrients

Researchers conducting the UGA study set out to investigate the paradox that though women live longer than men, they suffer from more illness late in life. In short, men are more likely to die earlier—but suffer fewer illnesses later in life. Women, on the other hand, live longer but suffer from a higher number of health conditions.

To conduct the study Dr Billy R. Hammond, a professor in UGA’s Franklin College of Arts and Sciences, and his reasearch team, analyzed data from studies extending back almost 200 years.

The analysis even included a review of a demographic study of Icelanders conducted between 1835 and 1920.

The findings, which were published in Nutritional Neuroscience in June 2022, established a clear link between high carotenoid intake and less incidence of disease in women later in life.

CAROTENOIDS
Carotenoids are found in the yellow, orange and red organic pigments of colorful plants—carrots, yams, pumpkins, apricots, corn, tomatoes and others.

POLYPHENOLS
Polyphenols is a category that is not as well defined as carotenoids, but it encompasses the flavonoid class that includes tea, citrus foods and soybeans.

In addition to lower incidence of macular degeneration—the disease most known to benefit from carotenoid intake—the researchers found a link with a number of other diseases: “Higher levels of serum carotenoids have been associated with reduced risk of ovarian and breast cancer, sarcopenia, skin wrinkling, inflammatory bowel disease and multiple sclerosis,” the researchers wrote in the study’s conclusions.

The study was published online in Nutritional Neuroscience in June 2022.

The study on children was conducted by researchers at the Department of Human Sciences at Ohio State University. The study’s goal was to examine the affect of fruits and vegetable intake on children with symptoms of ADHD and emotional dysregulation.

Lack of phytonutrients from fruits and vegetables have been shown to affect ADHD negatively in other studies, including studies that have compared the Mediteranean diet to the common Western diet.

To conduct the study researchers analyzed data from the Micronutrients for ADHD in Youth Study, an 8-week randomized double-blind placebo-controlled trial designed to examine the efficacy of supplemental nutrients to treat symptoms of ADHD and ED in a select pediatric population.

“These findings are important because they suggest that dietary intake is associated with symptoms of inattention in children with ADHD and emotional dysregulation: those eating less fruits and vegetables were likely to have more severe inattention,” the researchers summarized.

The study was published in Nutritional Neuroscience in May 2022.

To view our research on different phytonutrients, visit our Phytonutrient Posts here.