A group of scientists who created an international alliance to bring awareness to the importance of Vitamin D in fighting COVID-19 has now sent an official recommendation to the world’s governments.

When created in September the group’s goal was to improve public awareness worldwide about the protective benefits of Vitamin D and to gather petitions to encourage lawmakers.

Dr Gareth Davies, (PhD Medical Physics, Imperial College, London, and one of the founders), says the UK government’s recommendation of 400 IU daily of Vitamin D is ten times smaller than the group believes is necessary during the global pandemic.

The scientists in the alliance believe that 4,000 IUs daily should be sufficient to ensure a healthy immune response in most people, with some in the group advocating a short course of up to 10,000 IU in cases of severe deficiency.

On December 7 the organization upped the ante by publishing an open letter that provided research details and challenged the world’s leaders to follow the science on Vitamin D.

The letter calls for an immediate widespread increase in Vitamin D intake, with most signatories declaring that they personally take at least 4,000 International Units (IU) per day (and many taking more than that).

At the time of publishing the letter was signed by 120 member-scientists. The number is growing daily as more researchers continue to add their signatures.

More than one hundred of the signatories are medical doctors or PhDs, or both, and more than 60 are professors. Two British MPs have also signed the letter.

The campaign’s main organizers are Dr Karl Pfleger​ (USA) and Dr Gareth Davies​ (UK). Both organizers have backgrounds in medicine, as well as artificial intelligence and data science.

• Intervention studies (including RCTs) indicate that Vitamin D can be a very effective treatment. 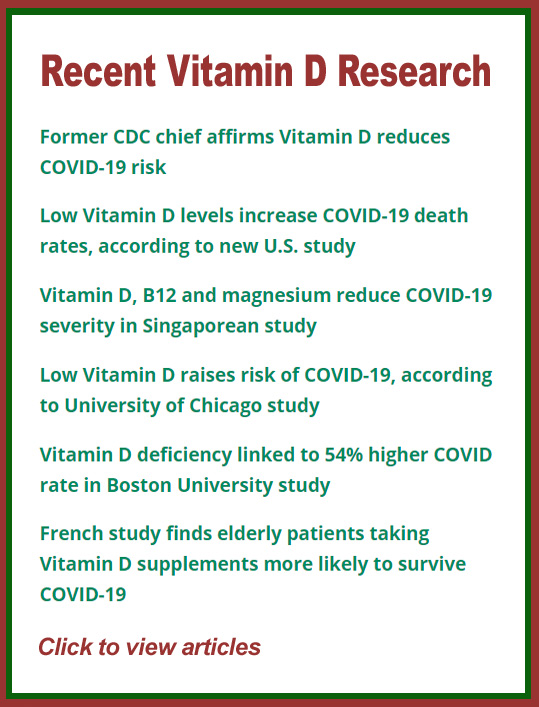 Vitamin D and the immune system

The scientists involved in the open letter noted that global patterns and risk factors for the Covid-19 pandemic and Vitamin D deficiency “match precisely” due to the impact on immune function​. They say that research shows that low vitamin D levels markedly increase the likelihood of COVID-19 infections, hospitalizations and deaths.

“If vitamin D levels are high, the innate immune system is strong,” explains Dr Davies. “This is the first line of defense the body employs when a pathogen first invades. In many cases, the innate immune response can entirely deal with an invasion before it takes hold. ​ ​

“It’s also involved a health adaptive immune response. This is a slower response where the body begins to make antibodies that specifically target the invading pathogen if it fails to control it via innate immune response.”

The full text of the letter, including research links and a list of the signatories can be seen at VitaminDForAll.org.

Vitamin D3 can be found in the following Optimal Health Systems products: