In midst of antidepressant epidemic, Vitamin B6 supplements found to reduce depression and anxiety

Depression rates and sales of anti-depressants are soaring in the U.S. and worldwide, but new research is revealing that micronutrients can often provide relief—without the risk of pharmaceuticals.

One recent study shows that taking high-dose Vitamin B6 supplements can reduce feelings of anxiety and depression.

Depression rates tripled over the course of the first year of the pandemic, according to a Boston University study published in the medical journal The Lancet Regional Health.

Pre-pandemic, about 8% of U.S. adults experienced depression. But in a representative survey taken between March and April of 2020, that statistic jumped to 28%.

And the situation didn’t improve. When researchers surveyed the same people a year later, they observed a jump to 32%. Researchers at Brown University, conducting their own survey, published similar findings.

The surge in feelings of depression and anxiety have led to a surge in antidepressant use. For decades consumers have been taught to turn to pharmaceuticals to fix their “chemical imbalance”—and the medical industry is only too happy to oblige.

Today, approximately 14% of U.S. adults aged 18 and over take antidepressant medications. An estimated 25% of those “antidepressant consumers” are long-term users. Antidepressant sales in the U.S. alone are a $6 billion a year industry.

Pharmaceutical companies are happy to cash in on the depression and anxiety epidemic. Fortune-Business Insights reports: “The dramatic rise in the demand for depression medications and the consequent surge in sales enabled the market to showcase a prolific CAGR of 28.0% in 2020, reaching $14.93 billion in value.”

Don’t forget the other B-vitamins!

• Vitamin B1 (Thiamine) has been designated “the morale vitamin” because of its ability to offset stress and relieve anxiety. Read more.

Fortunately, in the midst of the soaring depression rates, the new study on Vitamin B6 offers a glimpse of hope.

Scientists at the University of Reading in Berkshire, England measured the impact of high doses of Vitamin B6 on young adults and found that they reported feeling less anxious and depressed after taking the supplements daily for at least one month.

The study, published in the journal Human Psychopharmacology in July 2022, provides evidence supporting the use of supplements to modify levels of activity in the brain.

In this way it is hoped that mood disorders can be treated in lieu of the current one-size-fits-all pharmaceutical method.

Commenting on Vitamin B’s critical function, lead researcher Dr David Field explained: “The functioning of the brain relies on a delicate balance between the excitatory neurons that carry information around and inhibitory ones, which prevent runaway activity. Vitamin B6 helps the body produce a specific chemical messenger that inhibits impulses in the brain, and our study links this calming effect with reduced anxiety among the participants.”

The researchers also noted that while previous studies have produced evidence that multivitamins were capable of reducing stress levels, few studies have been carried out into which particular vitamins contained within them drive this effect.

The new study focused on the potential role of Vitamins B6, which is known to increase the body’s production of GABA (Gamma-Aminobutyric Acid), a chemical that blocks impulses between nerve cells in the brain.

To conduct the trial, researchers recruited over 300 participants who were randomly assigned either Vitamin B6 or B12 supplements or a placebo. The dose of the supplements was far above the recommended daily allowance—approximately 50 times greater. The trial period was for one month.

The study showed that Vitamin B12 had little effect compared to placebo over the trial period, but Vitamin B6 made a statistically reliable difference.

Raised levels of GABA among participants who had taken Vitamin B6 supplements were confirmed by visual tests carried out at the end of the trial, supporting the hypothesis that B6 was responsible for the reduction in anxiety.

Many foods contain Vitamin B6; however, the high doses used in the trial suggest that supplements would be necessary to have a positive effect on mood.

“Nutrition-based interventions produce far fewer unpleasant side effects than drugs, and so in the future people might prefer them as an intervention,” said Dr Field.

“One potential option would be to combine Vitamin B6 supplements with talking therapies such as Cognitive Behavioral Therapy to boost their effect.”

To learn more about the health benefits of B-vitamins check out the following Optimal Health Systems products: 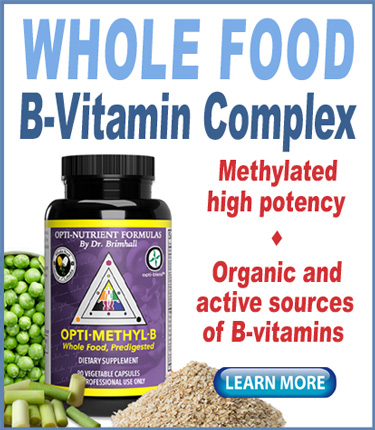