“Blue Zones” were first identified two decades ago. What have we learned? 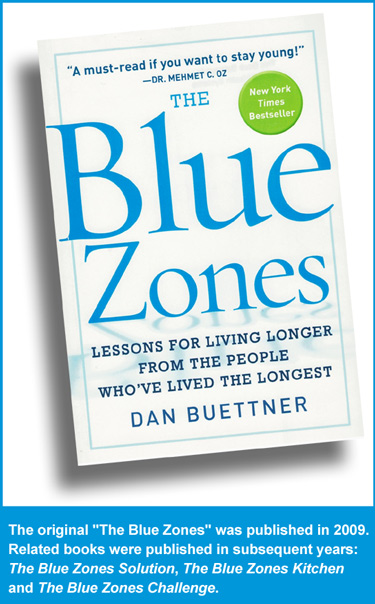 As the concept of “Blue Zones” approaches its 20th birthday, it may be beneficial to take a new look at the health principles highlighted by the research.

Even though blue zones theory (and later, The Blue Zones book) have detractors, there are common threads that can be connected. So, for those who want a longer, healthier life, examining what it takes to build one’s own personal blue zone can be a worthwhile undertaking.

Blue zones are regions of the world thought to have a higher than usual number of people who live much longer than average. The original name “Bluezones” was created by Dr. Michel Poulain and his colleague Giovanni Mario Pes. They discovered the first blue zone in Italy, where they identified an astonishing number of people living to 100 years or more.

In 2004 the journal Experimental Gerontology published their work, which identified the Nuoro province in Sardinia, Italy as the region with the highest concentration of male centenarians.

The additional four regions include: Okinawa, Japan; the Nicoya Peninsula in Costa Rica; the island of Icaria in Greece; and the city of Loma Linda in Southern California, USA.

Buettner’s follow-up research was conducted with the help of the National Geographic Society, which also lent its name and credentials with the publication of Buettner’s first book, The Blue Zones in April 2009.

The book was such a success that it led to follow-up books, numerous articles in National Geographic magazine, and an entire movement by health-conscious people who wanted to pattern their living habits after the centenarians living in the blue zones. Part of this movement included the AARP/Blue Zones Vitality Project, which started in 2009 and endeavored to reinvigorate health and longevity in participating communities in the U.S.

Most people who are advocates of “blue zone living” today associate the name “Blue Zones” with Dan Buettner due to the publicity surrounding his books and related organizations; however, this is not technically correct. Buettner can definitely be credited for making Blue Zones recognizable and mainstream, but the concept and name originated with the aforementioned research in the late 1990s by Dr. Michel Poulain.

The success of The Blue Zones is not without controversy. Lively debate arose soon after publication regarding some of the claims made in the book—most of it centering on the book’s advocacy of a “plant-based” diet..

Wikipedia states: “Harriet Hall writing for Science-Based Medicine has written that controlled studies into the Blue Zones are lacking and the Blue Zones diet is based on speculation, not solid science.”

Other researchers and authors who studied the blue zone regions say that vegetarianism is virtually non-existent in all the zones excepting Loma Linda.

For example, fish features heavily in the diet in Okinawa; sheep in Sardinia; chicken and fish in Nicoya; and goat meat in Icaria. 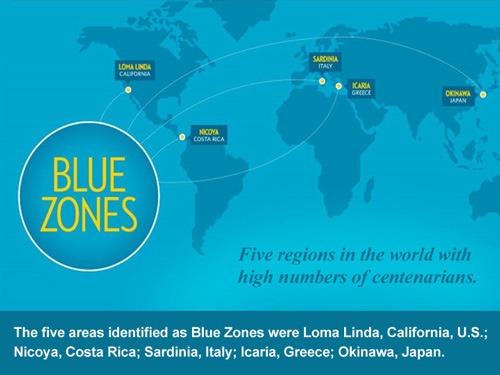 Nutritionist and blogger, Mary Ruddick, who lives in Greece, conducted her own unscientific observations in Icaria and says she is yet to meet a vegetarian or find a vegetarian restaurant in that particular blue zone.

Even in Loma Linda, California, where longevity is attributed to the healthy living of members of the Seventh-day Adventist Church, critics say only 50% to 60% of the members are vegetarian.

It’s not just about diet

It is unfortunate that so much of the discussion focuses on vegetarianism versus non-vegetarianism since this is only a portion of the book.

The book makes perfectly clear that “healthy eating” was just one part of living a long life. Other equally-important aspects include an active lifestyle, community or church involvement and avoiding stress. These are all common denominators that author Dan Buettner found in the blue zones.

In fact, there are nine commonalities—called The Power 9—identified in The Blue Zones way of life, and only two of the nine are diet related.

It is also worth noting that “plant based” does not necessarily mean “vegetarianism.” It does, however, mean that plant foods are prominent in the diet. On The Power 9 page at BlueZones.com “plant slant” is the wording that is used.

Other pockets of centenarians

The zones identified in The Blue Zones are not the only regions with many centenarians.

• Long before the The Blue Zones book, in 1998, a study was conducted by the Swiss Research Group Bluezones on the eating habits of the population of Yuzurihara, Japan, where the inhabitants grew very old and had the best quality of life. This was part of a worldwide research to find plant species with cell rejuvenation properties. 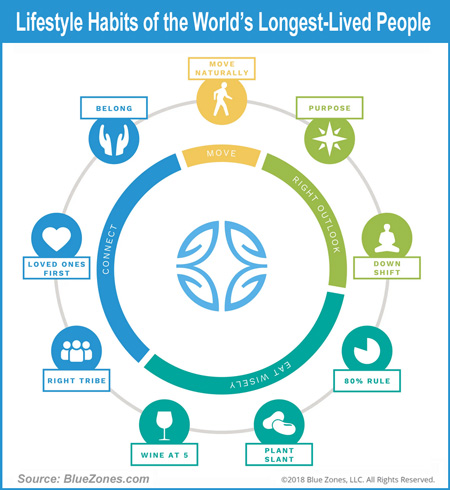 • According to Wikipedia, another research group from the University of California, in collaboration with the University of Rome La Sapienza, was investigating temporal blue zones in Italy outside of Sardinia.

• In 2014 the Bluezones Research Group and the University of Vienna investigated plant substances from Tibet and Nepal-Himalayas, which were considered “Bluezone areas.”

• Ashkenazi Jews in New York are also known for high rates of centenarians. To better understand this phenomenon, Dr. Nir Barzilai, director of the Institute for Aging Research at the Albert Einstein College of Medicine, has been studying hundreds of Ashkenazi Jews for a number of years.

• Like the Seventh-day Adventists in Loma Linda, members of the Church of Jesus Christ of Latter-day Saints (LDS) are also known for similar health habits that help them live about ten years longer than normal life expectancy—including high numbers of centenarians.

Are there “centenarian countries”?

While U.S. religious organizations seem to fair well on the centenarian scale, the country as a whole does not. While the U.S. does have the world’s largest number of centenarians, it does not compare well on a per-capita basis. According to Statista.com, Japan is the world leader with 6.2 centenarians per 10,000 people.

Changes since publication of the book

Since publication of The Blue Zones book some demongraphics have changed. In the paper Declining longevity advantage and low birthweight in Okinawa, author Tomiko Hokama states that Okinawa is no longer exceptional when compared to the rest of Japan: “male longevity is now ranked 26th among the 47 prefectures of Japan.”

Nutritionist Mary Ruddick, in her survey of Icaria, notes that young and middle-aged people in that particular blue zone are now very unhealthy compared to their elders. Though an unscientific observation, she doubts that Icaria would qualify as a blue zone today if a new study was conducted.

Critics point to these changes as evidence that longevity claims made in the book are not valid. On the other hand, these changes appear to be happening due to deviation from the very lifestyle habits that gave the areas their Blue Zone status in the first place. This suggests the book is correct in its lifestyle advocacy.

Build your own blue zone life

The Power 9 Chart was created specifically to help people take advantage of the lessons on longevity learned from Blue Zone centenarians.

You don’t have to be a Blue Zones absolutist to benefit from these lifestyle changes. You can adapt any of the nine commonalities that you want—and to the degree you want.

Even if you don’t make it past the 100-year mark, research shows these traits will help you live a healthier, more energetic and more disease-free life as you age.

Purchase the updated second edition of The Blue Zones on Amazon.

Sources: Links to all sources cited in this post are included in the article.